A LA MEMOIRE DES ACADIENS This memorial commemorates the 73 men, women and children buried in the churchyard in unmarked graves, following their exile from Acadia between 1756 and 1763 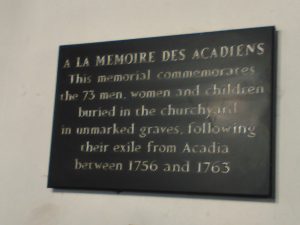 This is the only indication of the presence of a group of Acadians who were housed on the outskirts of the town in the mid C18.

Who were the Acadians?

(The British spelling is Acadians. The French use Acadiens or Acadiennes)

The Acadians were a group of French Catholic settlers of the early C17 who became caught up in the struggle between France and Britain for control of Canada, a conflict that started around 1688 and ended with the fall of Montreal in 1760.

They founded a colony in the Nova Scotia/New Brunswick area, bordering the British province of Maine, which they called Acadia. It appears that they established good relations with the indigenous peoples with some inter-marriage.

The Acadian capital of Port Royal fell in 1710 but much of Acadia remained under French control. After each territorial advance, the British invited the Acadians to swear unconditional oaths of allegiance to the British crown: an offer many refused because of their Catholic faith and ancestry.

Although many Acadians were neutral, others continued to work for the French and, with members of the Wabanaki Confederacy indigenous communities, raided British-held territory. Finally, the British lost patience and decided to expel the Acadians where they could.

There were two waves of expulsion. Together they are called the Great Upheaval, the Great Expulsion, or the Great Deportation.

The first wave came after the successful 1745 siege of the strategic port of Louisbourg. Under the Treaty of Aix-la-Chapelle (1748) at the end of the War of Austrian Succession, Louisbourg was handed back to the French in exchange for Madras.

Different sources quoting different figures but it seems that between six and seven thousand Acadians were expelled from Nova Scotia to American colonies and Britain in the first wave. Some 1,226 Acadians survived the ocean crossing to Britain in 1755, being separated into four groups: 336 (243) were sent to Liverpool; 340 to Southampton (Portsmouth); 300 to Bristol; 250 (220/204) to Falmouth. (The sources vary quite markedly on the numbers)

Falmouth, June 17: arriv’d, the Fanny, (Captained by) Bovey, from Virginia, with 204 Neutral French on board, being sent by the Governor of Virginia, he apprehending they would go and join their Countrymen and the Indians in their Interest.
Boston Evening Post, September 20, 1756

Many Acadians who were sent to Britain were housed in crowded warehouses and subject to plagues due to the close conditions, while others were allowed to join communities and live normal lives. They received a small payment each day and were treated as if they were prisoners of war.

The Falmouth/Penryn contingent was housed in a large barn at Upper Kergilliac Farm on the edge of Penryn. This had been used to hold prisoners of war a few years earlier during the War of the Austrian Succession (1740-1748). These Acadians are the ones commemorated on the plaque in St Gluvias church.

The north and west view of the L-shaped barn at Upper Kergilliac Farm on the outskirts of Penryn and Falmouth. Could these be the barn in which the Acadians were held? They seem very modest. 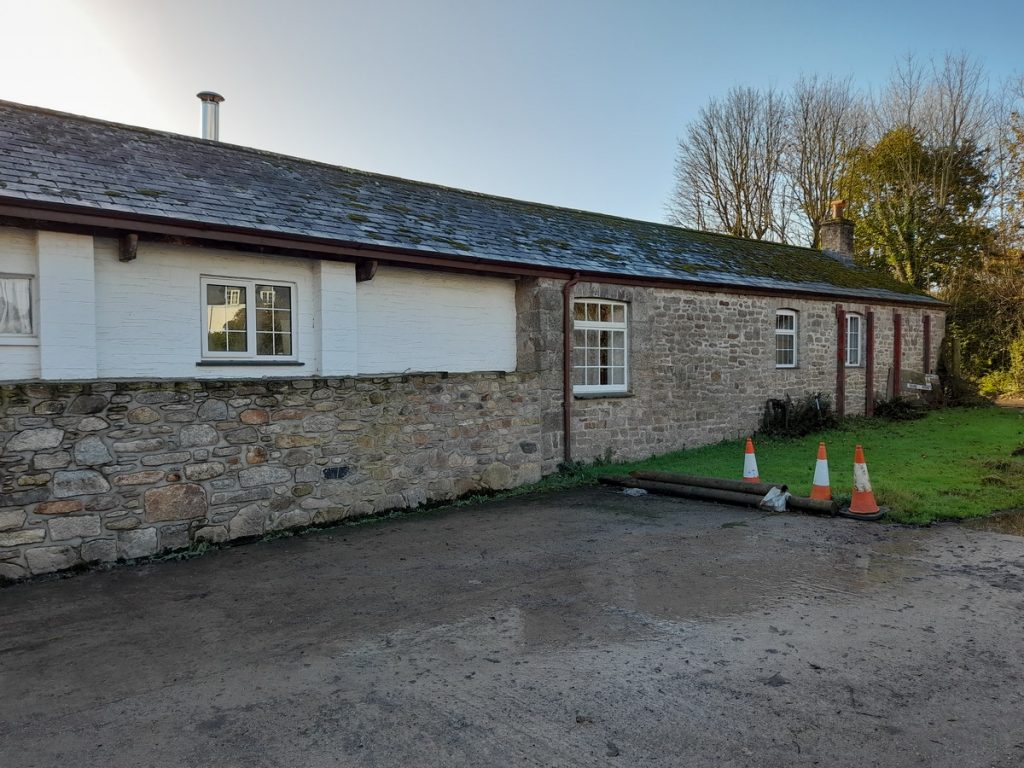 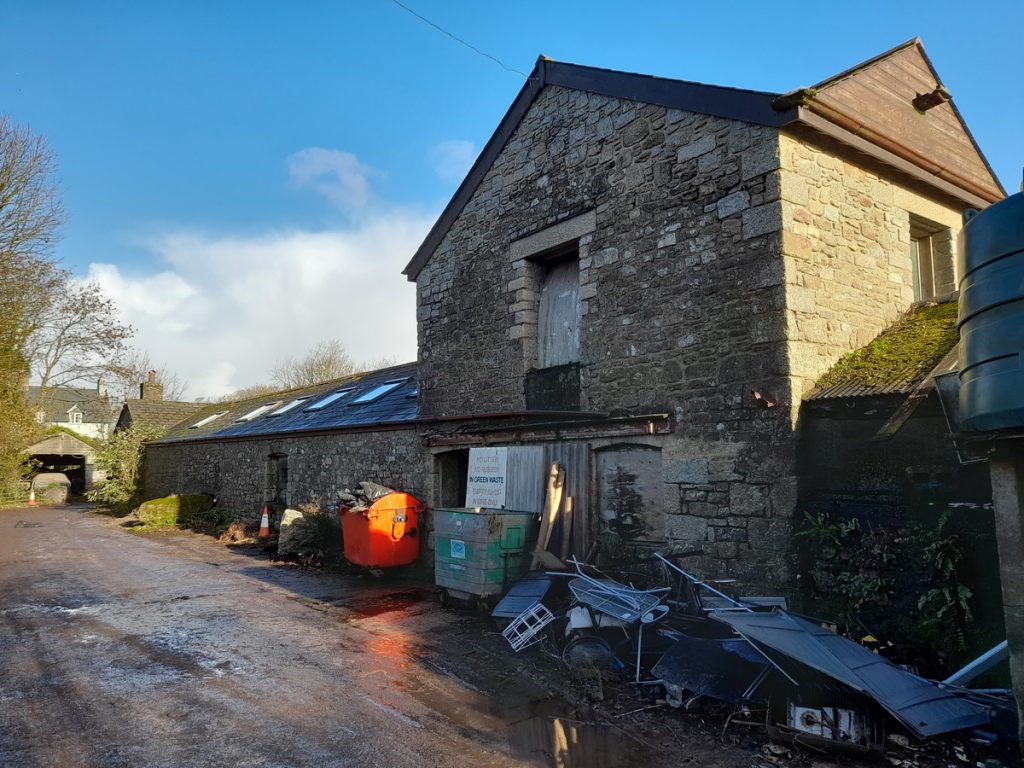 The second wave of expulsions

The second wave of expulsions came after the 1758 siege of Louisbourg which was more decisive and was followed by the advance on Quebec and Montreal. In this wave the Acadians were deported to France and Britain.

The fate of the deported Acadians

In 1763, the Treaty of Paris brought an end to the Anglo-French struggles of the Seven Years’ War. Canada was to be under British control. The Acadians were at last free to move around.

After 1764, they were allowed to return in small isolated groups to British territories in Canada provided that they took an unqualified oath of allegiance. A significant number migrated to Spanish Louisiana, where their name was Anglicised to ‘Cajuns’. Others returned to France, particularly Belle-Île-en-Mer off the western coast of Brittany.

By January 1763, after seven years in exile, only about 866 of the 1,266 Acadians originally deported to Britain had survived. Some 159 people, the remnants of the Falmouth/Penryn contingent, sailed for France on La Fauvette sent by King Louis XV to Falmouth.